By plane from Amsterdam to Manchester,

the flight was overbooked so we ended up in a long queue.

Here we met a friendly couple from Apeldoorn, their destination was Istanbul.

The woman was of Turkish origin and her husband was mixed.

She told that they had four children together, one of ten years, one of eight years and a twin of five years.

After a long time they got a chance to go on a holiday for just the two of them.

Before we said goodbye we wished them a romantic week and with a laugh we said to her husband that he should arrange candles and flowers for his wife.

We walked to gate 16 but the Flight Information didn’t show our plane, there was also no information available anywhere else.

We talked to an employee that came by, he checked it for us and sent us to gate 4.

Once we got there we found out that our plane had a delay of two hours because it couldn’t land yet.

Normally that ain’t a problem but now it kinda was as I was feeling not too well.

After I came out of the toilet a girl from Chile gave me something  to reduce it.

She mentioned that she was almost nineteen years and went to England for six months for her study.

She found it difficult to talk English, I told her that it wasn’t a problem and that she’ll learn it fast while her stay in England.

My first impression of England was not so great, because the Customs was a older man who was very grumpy.

I didn’t got recognised by the facial scanner of the passport control.

This was because i lost quite some weight over the last year and a half, 24 kgs/53lbs.

If this happens in the Netherlands someone will come to you and check your Passport right away.

But here it seemingly works different and you have to stand behind a line where they can see you from the desk.

Or atleast this is what the grumpy Customs snapped to me, as it wasn’t clearly indicated anywhere.

Luckily the lady behind the counter was very friendly, so that gave a smile again on this Madam’s face. 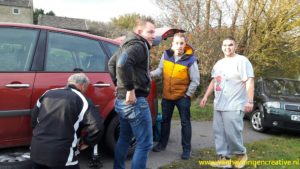 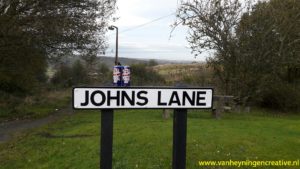 A friend who we met at the Pyramids in Egypt picked us up by car.

We drove from Manchester to Leeds.

Someone in front of us threw a metal can out of a car and we ran over it and ended up with a flat tire.

We slowly drove off an exit and stopped at a bunch of houses on the side.

Less than a minute later there were two young men there to help.

His wheel jack was too small because we were on a hill, soon an elderly man came out to see what we were doing.

This friendly English man took out a larger jack from his home and two minutes later the tire was swapped.

In the meanwhile my husband was full of grease, the man told him that he could wash his hands at his home.

When we were about to departure the man named some places we definitly should see before leaving Leeds.