As you probably know,  23 June of 2016 the British people voted in favour of departure from the European Union. 51.9% voted against staying with the EU.

Many of the young people we encountered on our trip in England had a strong opinion about the subject.

Most of them rather stayed with the EU because now they have to apply for a work visa if they wanna work anywhere outside of their own country.

There are approximately 80,000 homeless young people in England and this will only converge.

In England, if you don’t have a job you won´t recieve help from the government and you´ll end up on the streets.

So in my opinion the Dutch people should be very happy that their government is supporting those without jobs etc.

We came across a boy near our hotel. He was volunteering to feed the homeless.

He did this a number of days in the week around half past four in the night.

He invited us to come take a look but unfortunately we had too little time for it.

When we go back I would love go there to lend a hand and listen to some of their life experiences. 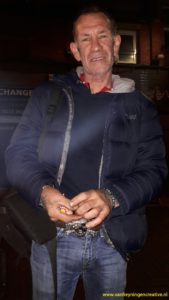 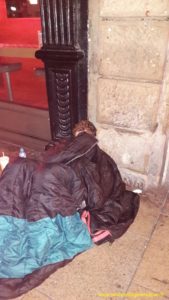 The last night in Leeds we met an elderly man between forty and fifty years old.

He used to have a normal life with his wife and two sons.

His wife became ill and died of cancer and now he got esophageal cancer himself.

Because of his illness he lost his work and ended up on the streets and now lived in a tent outside in a park.

Where ever you look there are homeless people on the street, starving and on drugs.

Sometimes you see them pulling cigarettes stumps out of cigarette cannisters on the sidewalks of the road.

They continue to hang around and disappear again, in a neverending cycle.

However, in England medical care is free.

If you should be operated in the hospital you have to pay your own medicines.

A mandatory health care insurance like in Netherlands doesn´t exist.

None of such own contributions at all,.

It shocked our friend when we told her about the prices in the Netherlands..

She found it somewhat comparible to America.

A pregnant English woman recieves a year leave from work, they strongly encourage breastfeeding in England.

As  it´s better for the bond between mother and child. And the body of the woman gets a chance to recover.

Instead of going to work with leaking boobs, and all the other unflattering things that go with breastfeeding.

Not even to mention the hormones that play a large role in the womans rapid moodswings.